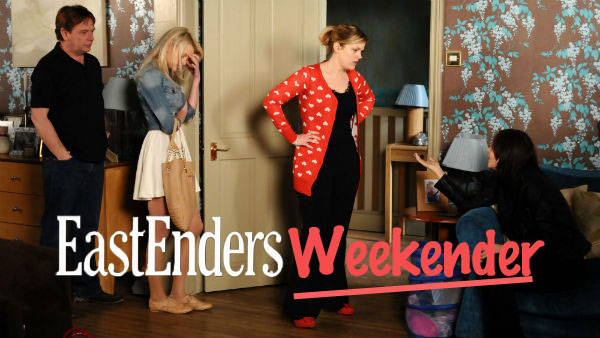 In a community as tight knit as Walford, it’s frequently made clear just how much its residents rely on their friends, family and neighbours, even when they might not realize it. Of course, it’s often only when they take that support for granted, and jeopardize it that they begin to see just how central it is to their happiness and sometimes, even their survival. This week, those relationships were tested as families were uprooted and friendships were strained, leaving some characters to face the consequences of pushing others away.

Not unusually, events in the square were set in motion by a shipment of illicit materials, as Derek and Billy received and then disseminated bottles of absinthe throughout the neighbourhood. As anyone might expect, the liquor was the catalyst for more than a few misunderstandings starting with Derek’s attempts to store the shipment in the Butcher household. Carol wasn’t biting, and although distracted by arrangements to visit Bianca, wasn’t willing to budge on her ruling. Adjusting to life without her daughter was already beginning to wear on her and the cost of taking the train to visit Bianca was weighing heavily.

She wasn’t the only one around the house with pressing matters on her mind. After dating Tyler for only a few months, Whitney was worried that she might be pregnant and when she failed to clear her search history on the computer inadvertently tipped Carol off to her predicament. When she went to Tyler to share her suspicions, he was unsure of how to deal with the situation (as Tyler so often is), but any worries he may have had were quickly dispelled by Whitney’s negative test result. Carol’s reaction to the prospect, however, prompted a more serious conversation with Whitney and revealed her plan to move the family to a flat closer to Bianca. The news didn’t set well with Whit, who reminded her that she’s an adult and that she didn’t plan on leaving with them.

Derek was even more apprehensive about letting Carol and the kids go. After trying unsuccessfully to coax Carol into staying, he seemed almost ready to admit defeat until he realized that dissent from Ray might derail their departure. While spending time with Morgan, he started to plant the idea of staying with his father, and did the same with Ray, encouraging him to fight to keep Morgan in town. It was one of those ploys that proved that even when Derek’s heart is in the right place, it’s hard for him not to resort to underhanded tactics to get what he wants and it was difficult to vilify him for it, especially when the plan didn’t work as he’d hoped.

At Derek’s brother’s place, the Brannings were excited to have Lauren back under their roof, and although it was perhaps a little too much, Tanya’s ‘homecoming lunch’ was a heartwarming idea. Things threatened to go sour, though, when Cora spied Lauren buying a bottle (or so she thought) of the increasingly ubiquitous absinthe and relayed the information to Tanya. When the touchy subject came up over the lunch, it turned out that Lauren was actually buying a CD for her mother from the absinthe-bearing shopkeeper – who would have thought! – and hadn’t taken any for herself. Of course, her family’s lack of faith was more than enough to send Lauren dashing for the door and angling to get back at them.

Things were no less dramatic at the Beales’ as Ian attempted to help Lucy study for her exams. Lucy was typically disengaged but her frustration was quickly overshadowed when Ian found out that she had taken over at the café for Mandy the day before. After Ian stormed out of the house (on his way to enjoy some of Billy’s ill-got green liquor at The Vic), Mandy actually attempted to help Lucy study for economics, but upon his return he was even angrier than he had been before. After banishing Mandy to work at the café, he exploded at Lucy breaking a glass bowl in the process. Like Lauren, Lucy didn’t take kindly to the outburst and left her house just as quickly and, along with her similarly disenchanted friend, made plans to get back at their parents in the best way they can manage.

With Whitey ducking out at the last minute, Walford’s two most poorly-behaved young women headed out on the town and despite Lauren’s guilt over letting her mother down, managed to get into plenty of trouble. Only moments after professing that she’d always have Lucy’s back, Lauren (apparently forgetting her friendly promise) attempted to run off with a gang of strangers, leaving her drinking buddy behind. Luckily, Lucy managed to pull her out of their car, but received some of Lauren’s drunken and mean-spirited comments rather than thanks. When she finally passed out, her friend managed to get her to the hospital, but upon waking she made a run for it.

Hesitant to return home after the ordeal, Lauren left Lucy to search for her all over again, this time in Walford. In her absence, Lucy was forced to come clean to both their parents, something that Lauren, when she did return, saw as a betrayal. As if on cue, one of the boys from the previous evening appeared on the Brannings’ doorstep to return her bag and in a whirlwind of shouted accusations, Lauren was once again out the door with the stranger known only as Danny. Luckily, she quickly realized that running off with him was a mistake. When she finally got around to listening to the worried messages on her phone she felt guilty for the way she treated Lucy. When she tried to apologize, however, Lucy made it clear that she was tired of looking after Lauren and dealing with her ever escalating antics.

And finally, after weathering a disconcerting visit from Inspector Marsden, Phil made an abrupt decision to move himself and the boys out of harm’s way – all the way to Portugal. Even for him it seemed like a rash move, and like Whitney, Jay opted out of the relocation. Unwilling to leave Walford, he went to stay with Abi. Even when Phil hounded him there, pressuring him to leave, he flatly refused. After Jay’s decision was clear, Phil went off the rails, finally realizing what his covering for Ben has cost him and how the way he’s treated his son over the years has affected him.

Still, there was at least one relationship that offered some hope in the midst of the floundering friendships and beleaguered families. While lamenting the loss of Carol, Morgan and Tiffany, Derek was also haunted by a mysterious young woman following him around the square. When he aggressively confronted her about her presence in Walford, she turned out to be his own daughter and not particularly interested in getting to know him better. After a second conversation though, it seemed as though Derek might have earned himself some time to get to know Alice and may finally get the chance to connect with the family that he has tried so desperately to replace with Carol’s.

HAVE YOUR SAY IN THIS WEEK’S POLL:

VisionTV is proud to be the Canadian home of EastEnders. Be among the first to catch all the jaw-dropping drama in each episode every weekday at 8pm ET/5pm PT.