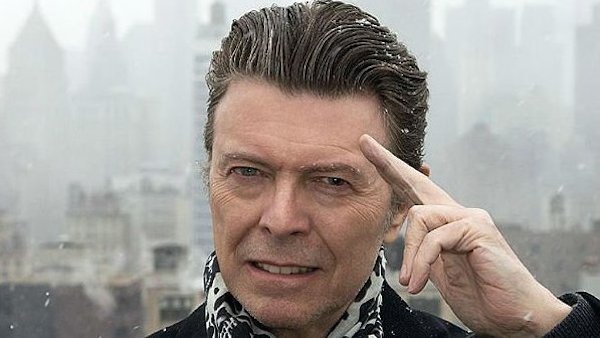 Today, the music world and its fans continue to mourn the passing of artistic and societal boundary shifter, David Bowie, after his 18-month battle with cancer ended on January 10. While he is no longer with us physically, his beautiful offerings like “Space Oddity,” “Life on Mars?,” “Ziggy Stardust,” “Changes,” “Heroes” and countless others from his 5+ decade career will continue floating through speakers and straight into our hearts.

Two days prior to his death, Bowie had turned 69 and released his critically acclaimed 28th studio album, “Blackstar.” With it, came an eerie, yet touching video for the song “Lazarus,” one that now appears to have been foreshadowing the end of his life. (You can watch the video at the bottom of this article – some images may not be suitable for all viewers.)

Adding credence to the significance of “Blackstar” was the album’s producer and longtime Bowie collaborator, Tony Visconti. In a statement shared on Facebook just hours after Bowie’s death was confirmed, Visconti noted “Blackstar” was Bowie’s “parting gift” and that he knew “this was the way it would be.”

When you’re someone that had as incredible of an influence as Bowie did, your life is going to be celebrated profusely and memorable stories will be shared. One of the best stories to surface was that of John Lennon’s widow, Yoko Ono. You may recall that Bowie collaborated with Lennon on the funky, anti-celebrity song, “Fame.” But as it turns out, their bond went well beyond that, even after Lennon’s assassination. 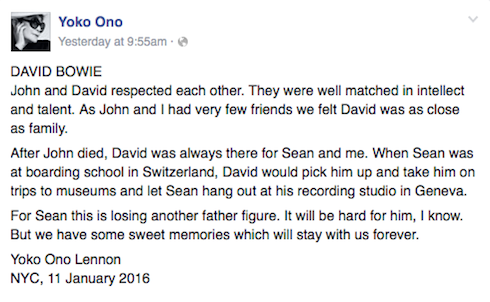 Considering that Bowie let few people in on his battle with cancer, many close friends expressed tremendous surprise yesterday after word of his death emerged. In particular, super-producer Brian Eno (who most notably produced Bowie’s “Berlin trilogy” albums in the 1970s: “Low,” “Heroes” and “Lodger”) was very much taken aback.

“I feel a huge gap now,” said Eno in a prepared statement. “We knew each other for over 40 years, in a friendship that was always tinged by echoes of [comic characters] Pete and Dud. Over the last few years – with him living in New York and me in London – our connection was by email. We signed off with invented names: some of his were Mr. Showbiz, Milton Keynes, Rhoda Borrocks and the Duke of Ear.”

“I received an email from him seven days ago,” continued Eno. “It was as funny as always, and as surreal, looping through word games and allusions and all the usual stuff we did. It ended with this sentence: ‘Thank you for our good times, Brian. They will never rot.’ And it was signed ‘Dawn.’ I realize now he was saying goodbye.”

Many offered sweet goodbyes to the British rocker, with some of the most memorable coming from his allies and friends Paul McCartney, The Rolling Stones’ Mick Jagger, Iggy Pop (who memorably sang a version of the Bowie-penned “China Girl”) and Brian May of Queen, who shared his sadness, before offering tremendous insight on how his band and Bowie brought rock anthem “Under Pressure” to life. 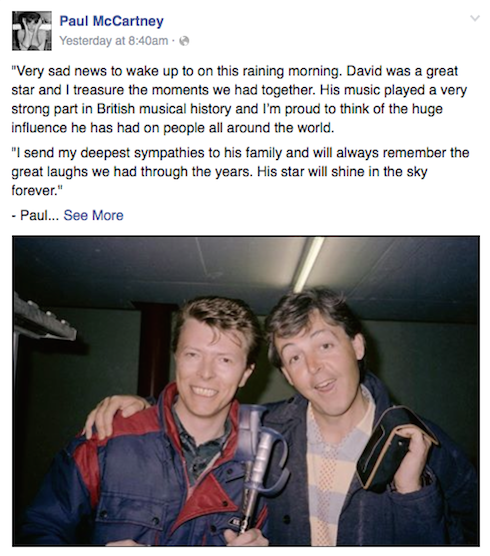 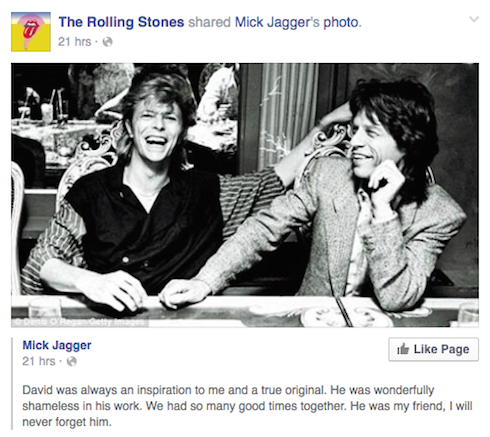 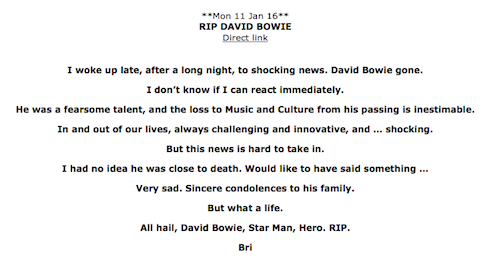 For many of us, the music of David Bowie has filled a huge part of our life’s soundtrack for decades. With his prolific, rebellious and insightful spirit, it sometimes felt as if Bowie would somehow out live us all – age and illness didn’t seem like something that applied to his otherworldly self. But alas, we must part ways with the Thin White Duke and feel grateful for his existence. Musicians pass on, but their music lives on.

Together, let’s take comfort in this gorgeous quote that’s continuing to circle the globe: “If you’re ever sad, just remember the world is 4.543 billion years old and you somehow managed to exist at the same time as David Bowie.”