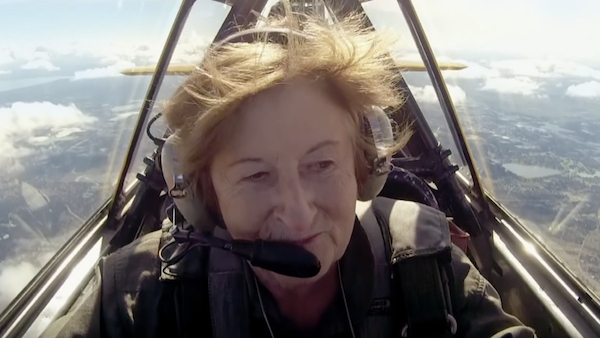 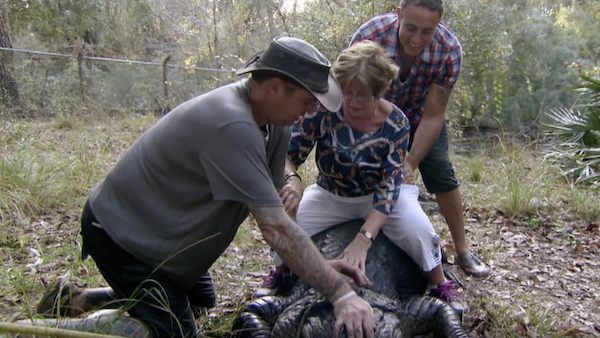 On her way back to the U.S. of A, Nancy is looking forward to Florida and hopefully a trip to Walt Disney World. But, little does she know that the only goofy activity she’ll see is in the death-defying adventures her son Baz has lined up for them.

Not starting off slowly, Baz takes Nancy to the Florida Everglades so that she can get close to a gator. Although this body of water is the home to over one million alligators, none want to make their presence known as Baz and Nancy take a fan boat through the area. Their guide blames the weather, but Baz doesn’t have time for excuses: he needs to get Mammy next to some gators.

Switching course, the duo wind up at a privately run alligator sanctuary where their day will be spent helping the crew inspect a swamp for its 12 gators. Although a little hesitant at first, Nancy speedily turns a bout of fright into enthusiasm when brought near the great reptile’s lair. Baz is flabbergasted by his mother’s actions, even if they quickly shift back to normal as soon as she learns that sitting on a gator is something she needs to do. Following many, many reassurances, Nancy slowly pops on top of a 12-foot gator and places her hand on the back of its neck. As proud as Baz is by how this went, he can’t help but wonder aloud what will actually scare his mother.

Oddly enough, giant RVs freak out Nancy more than an animal that can easily kill a human. Nancy doesn’t like big vehicles, driving, or Baz driving her, thus this seemingly pedestrian task turns Mammy into a backseat driver before the RV has a chance to leave the rental lot. It’s 44-feet long and impressively wide, leaving Nancy to wonder just how this vehicle will fit anywhere. Baz, has no fear, even though he struggles early with handling and backing into a trailer park. Fortunately, no other vehicles or bystanders were harmed in Baz’s driving of the RV. 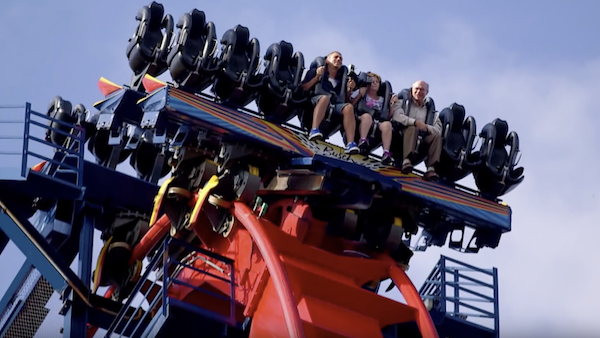 As much as Nancy feared being on solid ground with Baz behind the wheel of an RV, nothing could’ve prepared her for a visit to Busch Gardens to ride a 200-foot high rollercoaster, which just so happens to have a 90-degree drop. Pausing due to trepidation, Nancy is not keen with the idea of going upside down, let alone on the rollercoaster at all. Putting her mind at ease, however, was the ride’s creator who not only explained how safe it was, but also opted to take it for a spin with Baz and Nancy.

All of this seemed to help Mammy keep her wits about her, as she actually took to the rollercoaster rather well. Sure, her face did look a little panic-stricken at points…but maybe that could’ve just been the way the wind was hitting her as the rollercoaster flung around the track.

To top off the eventful day, Baz takes Nancy into Miami for a night on the town. There’s drinking, dancing and some real bonding at play: at least until Baz tries to get Nancy to give him a tattoo.

Late in the evening, the duo ends up at a well-respected tattoo parlour to meet an artist with just as much clout. The goal here is for Nancy to tattoo “Mammy” onto Baz’s body. Nancy, however, is not having it. Baz empties the tank of convincing tactics, but his mother’s foot remains firmly put down. No, she is not scared of the task; rather she’s vehemently against tattoos. Baz, who has many tattoos on his body, is now put into an awkward position as this attempted adventure opens up a wound not yet healed.

Nancy reveals that the one thing she asked Baz to never do was get tattooed. But, he went against her on that and the frustration and disappointment remains fresh. Seeing as this escalated into a very touchy situation, Baz backs off and the two call a truce. 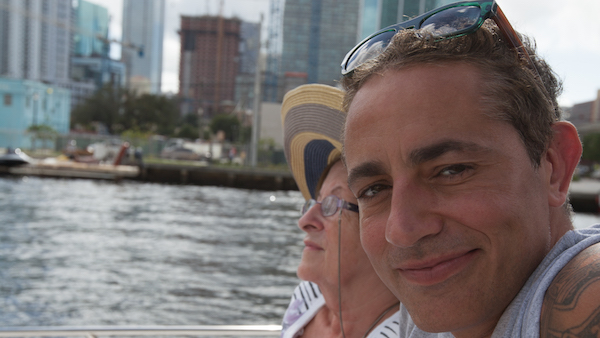 Still feeling emotionally knotted the next morning, Baz opts to try something his mother has always wanted to do: parasail. Baz admits that this task is not the type of event that gets his heart racing, but he forgoes his feelings and hangs in the air with his Mammy as the two take in a beautiful view of Florida from up above the ocean.

Before leaving the Sunshine State behind, Baz has one more crazy experience planned. Of course, this experience includes a 1942 warplane and the hope that his mother will learn to fly one. This hope, however, is almost dashed as Nancy begins to offer a number of irrational fears like falling out of the plane when it’s in the air.

The pilot, whose charm and negotiating skills would make you think he spent many years selling grape Freezies to people wearing white gloves, laid out a great case and got Nancy into the cockpit. Gripping the dashboard with all her might, the pilot gently coaxes Nancy into taking charge of the flight. She briefly does so, all the while refusing to go upside down. (Maybe the pilot didn’t quite convince Nancy that she wouldn’t fall out of the plane.)

As for Baz, of course he flew the plane with great passion and couldn’t help but get excited like a child at Christmas when flying upside down.

When back home in Dublin, Nancy boasts about the Florida trip to an acquaintance, all the while coming to an important realization: “I can’t think about age anymore.”

At last it appears that something has clicked in a big, big way!

Next week on “50 Ways to Kill Your Mammy,” Baz and Nancy visit Thailand and take the stage in a cabaret; brave some wild river rapids; and learn how to handle elephants.