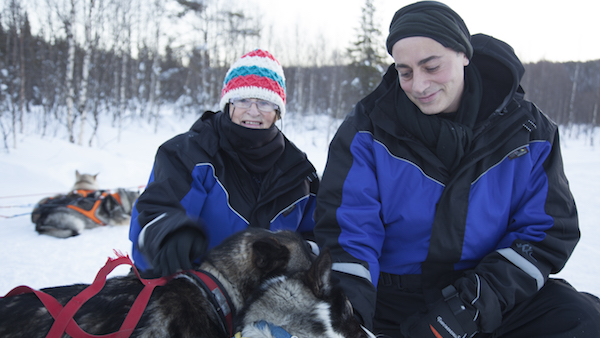 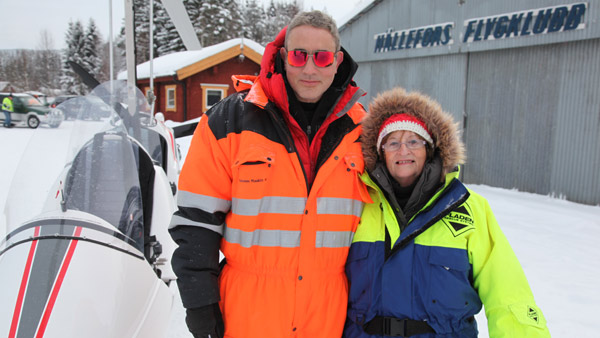 As much as Nancy continues to unveil a heightened sense of bravery, she is still prone to momentary freak-outs before embarking on whichever adventure Baz arranges. This time around, Baz and Nancy take their globetrotting ways to Scandinavia for a snowy series of stunts not designed for the faint of heart.

First up, the duo zips up their protective snowsuits and get ready to take to the sky in Sweden for a gyrocopter ride. This open-air helicopter is small in stature, but big on fun. Naturally, Nancy first focuses on how dangerous the machine looks and requests that her son take the family’s maiden flight. In doing so, Baz appears thrilled by the gyrocopter’s movements as it soars above a wintery forest. This, as we’ll soon discover, was Baz putting on a tough front. When honesty comes into play, Baz admits that he found the experience terrifying – of course, he didn’t tell his Mammy this as she hopped aboard for her ride.

After using the Lord’s name in vain quite often on the way up, Nancy settled in as Baz looked on with pride from below. Nancy’s fear for the gyrocopter soon turned to love. By the time she landed, Nancy was more concerned about how cold her hands had gotten than anything else.

Considering the intensity of their first activity, Baz hands over the reigns to Nancy for the second day of the Scandinavian trip. With this opportunity, Nancy decides to take Baz on a quaint ferry tour. Immediately, Baz is reminded of enduring these trips as a child and gets itching to go back to an activity better capable of pumping his pulse.

To do this, Baz and Nancy exit Sweden for Finland. Here, the pair trudges through limb-impeding snow to get to a more militant challenge: driving a 16-ton Russian tank through a wooded area. Baz is ecstatic, the teacher is bombastic, but Nancy becomes a bit frantic when told that she’ll need to squeeze into the tank and go for a ride.

Once inside the tank’s cozy confines, Nancy snaps her eyes shut while in the passenger seat – however, they’ll need to be open when she takes over the tank’s controls.

As for getting her from the passenger’s seat to the driver’s seat, that task itself takes 14 minutes to complete – no exaggeration. However, once Nancy is given the proper instruction and develops an added dose of confidence, she finds herself rolling a beastly tank through the snow and over some trees. While their time with the tank is brief, Baz is convinced that Nancy is better at driving one of them than she is a car.

The following day, Baz and Nancy avoid any heavy machinery and instead let their time go to the dogs – and their sleds.

For this dogsledding escapade, Nancy insists on driving the pack of huskies first – even though Baz has previous dogsledding experience. For a woman who starts off most of these activities very hesitantly, Nancy’s eagerness is surprising – she’s comfortable with the instructions given and is ready to mush.

Well, that comfort lasted about 20 seconds as Nancy made a tactical mistake while driving the dogsled and was flung off the back of it and into the snow. Concerned for his mother’s well being, Baz rushes to check on Nancy. Yes, she made a pretty solid thud, but is no worse for wear. Even still, that’s it for the time with the speedy pups.

For their Finnish finale, Baz and Nancy visit SantaPark, Santa Claus’ home cavern. Here, they take a tour around this incredible Christmas wonderland, before meeting Santa himself. When asked to make a wish, Nancy says that she’d love for her granddaughter, Baz’s eldest child, Hannah, to appear at SantaPark. That’s definitely one lofty wish for a man usually just asked to bring dolls or video games to kids. 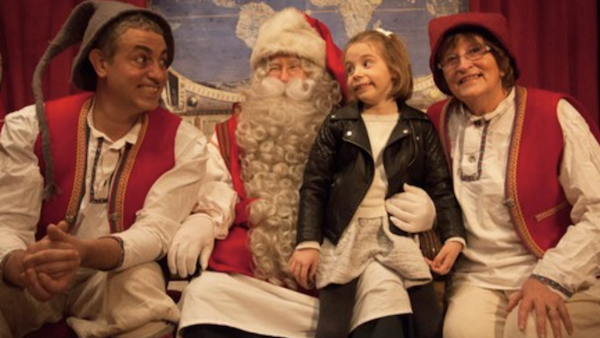 After some Santa time, Baz and Nancy receive training on how to be elves so that they can entertain a group of eager visitors. Once training is complete and the first pack of guests file out, Baz slips away to introduce his big surprise.

Meanwhile, Nancy is still in one of the rooms working on her elf voice. All-of-a-sudden, Hannah bursts into the room and towards her grandmother. Nancy, as you could imagine, is absolutely floored and the tears of joy begin to flow. Embracing Hannah tightly, Nancy expresses how delighted she is by this happening.

As any amazing grandmother would do, Nancy takes Hannah to meet Santa Claus so that Mr. Kringle can grant her a Christmas wish or two. Outside the room, Baz quietly sneaks a peek as his mother and daughter take part in such a heart-warming moment. Quickly, his eyes well up as two of the most important women of his life share an experience that’ll live on in their hearts for years and years to come.

On Monday, October 31 (8pm ET/5pm PT) on “50 Ways to Kill Your Mammy,” Baz and Nancy head to India where they have another go at zip-lining and visit the Temple of Rats.