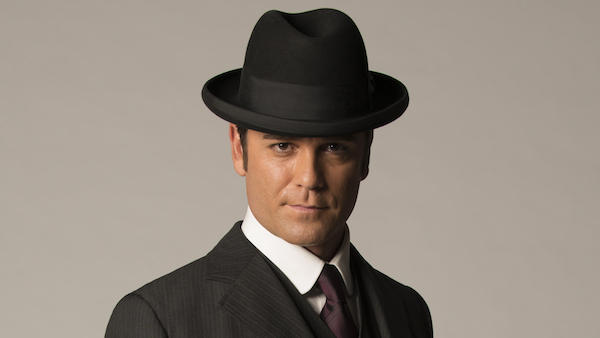 On occasion, haven’t we all imagined what it would be like to live the life of a beloved actor? The accolades; hanging out with brilliant stars of the screen; and getting paid to work all over the world. Wouldn’t that all be unassailably awesome to experience even just a slice of?

Living within that world is “Murdoch Mysteries” and “Sue Thomas: F.B. Eye” star Yannick Bisson. And judging from his Instagram account, the acclaimed Canadian actor has had one heck of a week!

One moment that stands out in particular is a photo Bisson took while aboard a flight on Monday. Once you look past Bisson’s enthusiastic grin, you will see Rush member Geddy Lee seated across the aisle. Despite Lee having his baseball hat pulled pretty low and looking downward, Bisson was still able to recognize the Canadian Music Hall of Famer.

“When Geddy Lee is on your flight “Fly by night away from here…” #sorryhadtodoit#Rush,” cleverly read the photo’s caption on Bisson’s Instagram.

It is unclear whether or not Bisson introduced himself to Lee after taking the photo. But, we can all playfully imagine Bisson asking Lee to decode his favourite Rush lyrics.

The night prior to this rock n’ roll encounter, Bisson was in Toronto as “Murdoch Mysteries” won the Canadian Screen Award Golden Screen Award for best TV Drama or Comedy.

Shared Bisson on Instagram: “We won!!! @cbcmurdoch has won the Golden Screen Award at the @thecdnacademy awards!!! Most watched show in the country!!”

Throughout the years, both “Murdoch Mysteries” and “Sue Thomas: F.B. Eye” have appeared on VisionTV. Keep an eye out for future episodes!

We won!!! @cbcmurdoch has won the Golden Screen Award at the @thecdnacademy awards!!! Most watched show in the country!!