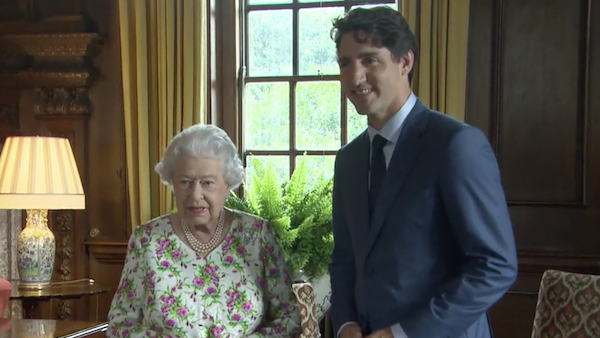 Yesterday (July 4), Canadian Prime Minister Justin Trudeau may have met his stylish sock match in Irish Taoiseach Leo Varadkar, but that event certainly can’t compare to having an audience with the Queen.

Today in Edinburgh, Scotland, Trudeau partook in a private meeting with Queen Elizabeth II. This marked the second time in which Trudeau has met with the Queen since becoming Prime Minister in 2015.

CBC.ca reports that this particular get together happened “largely because [Queen Elizabeth II] was unable to travel to Canada herself to mark Canada’s 150th birthday.”

Outside of the Queen’s official Scottish residence, the Palace of Holyroodhouse, Trudeau didn’t take any questions from the assembled media, but did make this statement:

“It’s always a pleasure to have an audience with Her Majesty, the Queen of Canada,” said Trudeau. “To highlight our 150th anniversary since confederation, I offered her the flag that flew atop the Peace Tower on July 1st, on Parliament Hill.”

He continued: “[The meeting] was as it often is – as it always is – a warm, engaged conversation in which she displayed knowledge and interest on a wide range of global affairs and goings ons in Canada. It’s always, always, a pleasure to meet with her.”

Earlier in the day, Trudeau attended the University of Edinburgh convocation ceremony and received an honorary doctorate. Drawing a laugh from the Queen, Trudeau told her this of the occasion:

“I’ve been offered an honorary degree at the University of Edinburgh, which probably dismays a number of my former professors to see me as a doctor now, even honorary.”

If you’re a big fan of current affairs that relate to politics, social issues and more, please tune into theZoomer Mondays at 10pm ET/7pm PT and Fridays at 2pm & 11pm ET/11am & 8pm PT.