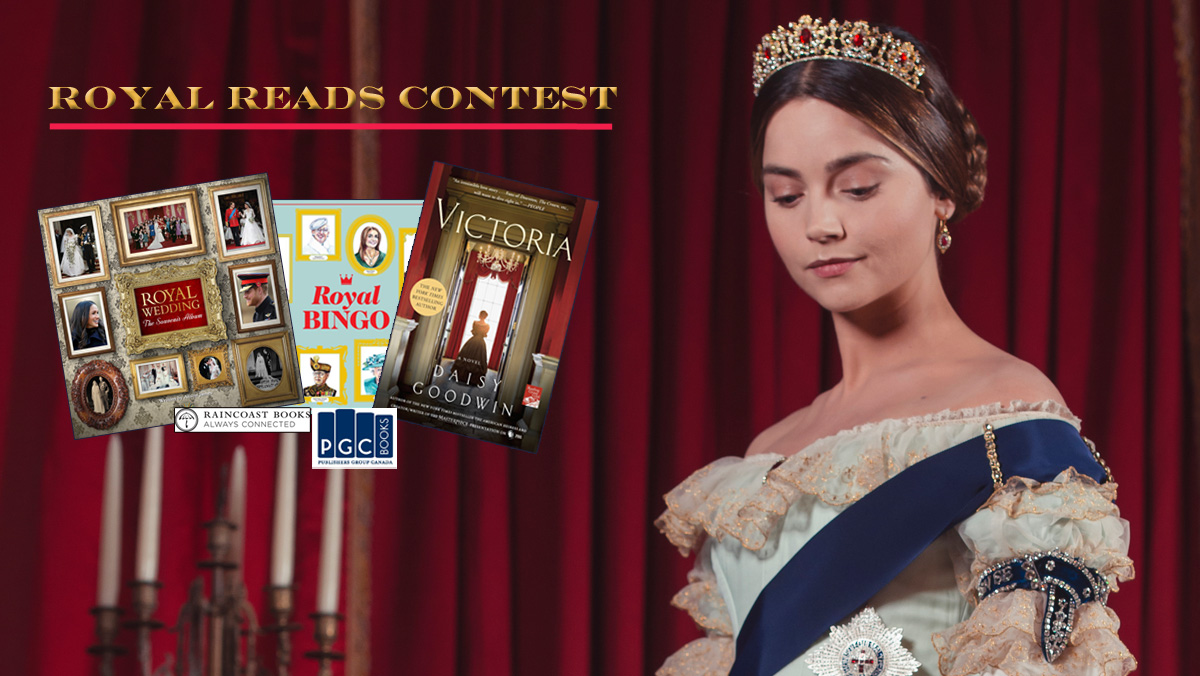 Royals fans, it’s time to rejoice!
Thanks to Raincoast Books and Publishers Group Canada, we have your chance to win 1 of 10 majestically entertaining prize packages that will transport you all the way from Queen Victoria’s reign to the newly married Duke and Duchess of Sussex. From the official souvenir album of last month’s Royal Wedding to playing bingo with the Monarchy, this is one brilliantly royal way to win!
This contest has closed. Thank you to everyone who entered! Winners will be contacted July 9 – 11, 2018.

All summer long, VisionTV has must-watch programming for Royal Watchers. On At Her Majesty’s Service, Mondays at 8pm ET/5pm PT from June 4 – 25, journey with Dame Penelope Keith to get a fascinating behind the scenes look at the U.K.’s royal residences and meet the people upholding royal titles and ancient appointments, from the Royal Falconer to the Washer of the Sovereign’s hands. Plus, Wednesdays at 9pm ET/6pm PT, join us for an encore presentation of the thrilling and very romantic first season of Victoria, starring Jenna Coleman as the young Queen.

The whole world celebrated when American actress Meghan Markle marries Prince Harry of Wales at St George’s Chapel, Windsor and becomes a member of the most famous and fascinating monarchy there is.
Royal weddings are the most joyous of occasions and now, as the Windsors’ enjoy a renaissance in the public’s affections and welcome the latest addition to their ranks, what better time to relive Harry and Meghan’s Big Day and remember other glorious Royal weddings from recent history. More…

Drawing on Queen Victoria’s diaries, which she first started reading when she was a student at Cambridge University, Daisy Goodwin – creator and writer of the new PBS Masterpiece drama Victoria and author of the bestselling novels The American Heiress and The Fortune Hunter – brings the young nineteenth-century monarch, who would go on to reign for 63 years, richly to life in this magnificent novel.
On June 19th, 1837, she was a teenager. On June 20th, 1837, she was a queen. Daisy Goodwin’s impeccably researched and vividly imagined new book brings readers Queen Victoria as they have never seen her before. More…

This majestically illustrated bingo game features portraits of 64 royal icons from around the world. Spot famous faces like William and Kate, or meet some less familiar figures such as the playboy prince Wenzeslaus of Liechtenstein.
Royal Bingo brings a fun twist to the traditional game, with all the European royal families represented, along with some more exotic courts such as Jordan, Brunei and Malaysia. More…

In celebration of the arrival of the fifth in line to the throne, ‘Royal Babies – A Heir-Raising History’ goes behind Palace doors to discover the pleasures, pain and pitfalls of Royal pregnancies, births and babies through the ages.
Alison James is a History Graduate and Showbiz Journalist who writes about royals and celebrities for the Daily Mail, the Daily Express and Yours magazine in the UK. More…


How to be a Modern Princess by Quadrille Publishing

Meghan’s done it. Now you can too, with these tips and tricks for becoming the ultimate modern princess. Meghan Markle has changed the rules. What was once an unattainable 7-year-old’s dream has now become an achievable reality. With this book, step into Meghan’s glass slippers, and find out all the little ways in which you can channel your inner modern princess.
Simple yet profound, this humorous little book could change your life forever. Read it, enjoy it, learn from it. and it’s just possible that your fairy tale dreams could come true. More…

Get social with Publisher’s Group Canada:

Get social with Raincoast Books:

Contest closed July 5, 2018.
One entry per day per valid email address.
Must be 19 years or older to enter. Contest not open to residents of Québec.