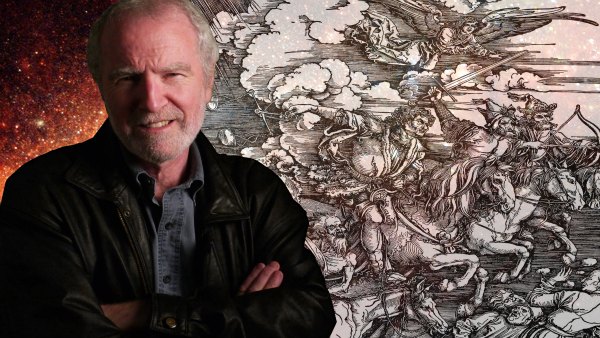 Why do we keep anticipating The End of the World… an end that never materializes? What happens when nothing happens? Apocalypse…When? explores the origins, implications, repercussions, and psychology of Doomsday thinking.

“It’s tough to make predictions, especially about the future”. …attributed to Yogi Berra
For behind the scenes photos, video sneak peeks and more visit our Apocalypse Countdown Feature Page.

Apocalypse…When? in the Press: Read “‘End of the World’ starts Monday.”

Apocalypse…When? was produced and directed for VisionTV by David Springbett of Asterisk Productions Ltd..

EPISODE 1: Where Did We Get This Notion?

What is this ongoing fascination we have with the end of the world? Did the idea of an end time begin with ancient peoples in awe of shooting stars in the night sky? Does apocalyptic thinking attempt to make sense of the cosmos, or quiet a primitive fear hard-wired into our brain? Biblical prophets’ dire warnings of God’s judgment, and later promises of eternal life, kept believers on a path of righteousness – and these early belief systems continue to exert a powerful influence over our second millennium lives. Yet despite many projected dates for Doomsday, the end of the world has never come. So what happens to believers when nothing happens? Is faith shaken, or does the rational mind find good reasons why the Apocalypse keeps being postponed?

“Why is God blessing my neighbour with a Ferrari and me with a Datsun? What’s wrong with this picture? Apocalyptic is the answer.” … Dr. Richard Ascough – Associate Professor of New Testament, School of Religion, Queen’s University

EPISODE 2: How Do You Know a Prophet When You Hear One?

Was Nostradamus a prophet? Was John of Patmos? Harold Camping? Is the ancient Mayan calendar a prophecy predicting a specific end date of December 21, 2012? The Christian concept of Apocalypse revealed in the Book of Revelation became a major influence for religious practices and popular culture around the world. Followers of Islam believe Armageddon is imminent; Hindus believe we are reaching the end of a dark cycle of time and the start of a new golden age. Why does the concept of Doomsday seem to transcend cultures and spiritualities? Is it simply human nature to want to know the shape of things to come, and embrace those who provide possible answers? Do our apocalyptic visions indicate an end of time or a chance for a new beginning?

“I’ll make one prediction, it’s the only prediction I ever make. Every single apocalyptic prediction is wrong, and will be wrong – forever.” … Dr. Lorenzo DiTommaso – Professor and Chair of Religion, Concordia University

What happens when rational thought meets prophetic vision? Despite advances in science, industry and commerce, apocalyptic prophesies still maintained their grip on the public imagination in the age known as the “great enlightenment”. One of the most influential of modern prophets was William Miller, a 19th century New England farmer who convinced thousands of people in America and Europe he had calculated the exact year of the Second Coming. When Christ failed to appear, most believers lost their faith, but some were reenergized. What happens in the aftermath of a failed prophecy? How do people maintain belief in the face of constant failure? And what impact did the emerging force of “mass media” have on the spread of Doomsday thinking?

“The only thing that’s mysterious here is that people could choose to believe some very extraordinary things.” … Dr. Lorne L. Dawson – Chair, Department of Sociology and Legal Studies, University of Waterloo

EPISODE 4: Do It Yourself Doomsday

Nuclear weapons, religious intolerance, corporate greed, environmental degradation: are we creating our own end-of-the world scenario? Prophesies flourished in the early 20th century in books and newspapers, later in the mass media of radio, television, magazines and movies. International tensions eventually led us to the brink of nuclear war, and prophets found themselves in a whole new age of potential annihilation. As the millennium approached, old prophecies were again in vogue. The concept of The Rapture has spawned an industry – part entertainment, part politics. Why do we still give credence to apocalyptic visions? Is the need for apocalyptic belief lodged in our brains because we know only one thing in life is certain: our own deaths?

What if “apocalypse” simply means not knowing what’s coming? The year 2000 arrived without a computer-crashing Y2K bang, yet people continue to believe the dates ahead of us, especially December 21, 2012, are ripe with prophetic possibility. But among these imagined scenarios, are there serious harbingers of real danger: increasingly extreme, violent weather? Solar flares? Earthquakes and tsunamis? A global financial system on the verge of collapse? Are these increasingly common phenomena warnings for us? Should contemporary forecasts of impending doom frighten the life out of us, or are we, like Ebenezer Scrooge and his visions of the future, being offered a chance for a new beginning…if only we had the will to change?

“The arc of the physical universe seems to be short in this case, and bends toward heat. And there’s a very definite time limit on how long we have to really get our act together.” … Bill McKibben – Author, Eaarth: Making A Life On A Tough New Planet