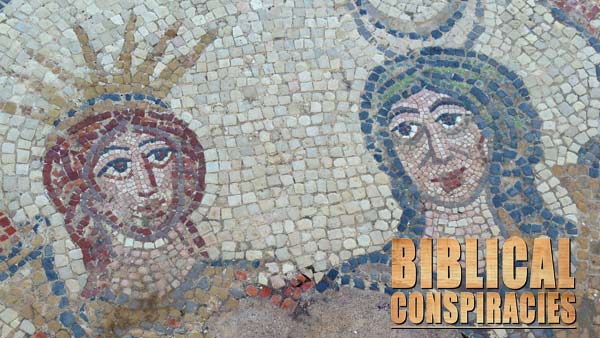 For thousands of years, alternative truths have been hiding in plain sight, locked away with secret codes and symbols whose meanings were known only to the initiated…until now.

Biblical Conspiracies is an unceasing pursuit of stories hiding in the codes and symbols left behind by those with a secret to keep. Each hour-long episode sets out to investigate an unknown story discovered within a genuine, undisputed artifact. Using unique graphic-novel style animation, highly stylized CGI, lavish recreations and cutting-edge forensic science we explore the time period in which the artifact existed and what it meant to the people who treasured it.

DOWNLOAD FREE eBOOKS FROM THE EVERYTHING ZOOMER BOOK CLUB. 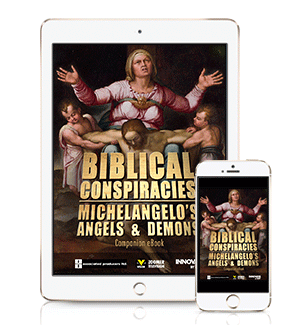 Delve deeper into these intriguing investigations with the perfect, in-depth companions to two of the Biblical Conspiracies chapters.

Created by Innovate By Day and Biblical Conspiracies’ Simcha Jacobovici, Michelangelo’s Angels and Demons explores possible hidden codes in Michelangelo’s greatest works of art that reveal his spiritual beliefs. The James Revelation takes a look at the astounding discovery and implications of an Aramaic inscription found on a burial ossuary that reads “James, son of Joseph, brother of Jesus.” Download your free copies today!

Available to watch online below.
Nails of the Cross:
In 1981, the tomb of the High Priest Caiaphas – who according to the Gospels sent Jesus to the cross – was unearthed in Jerusalem. Along with other artifacts, two Roman nails were recorded in the official excavation report. The film tracks a 5-year investigation into these nails. Using electron microscopes and other state-of-the-art tools, scientists have made a remarkable discovery that proves beyond a doubt that the nails in question were used in a crucifixion. Could these be the nails used to crucify Jesus?

Available to watch online below.
Secrets of the Sculpture
Michelangelo’s magnificent sculpture – the Pietà – is the most iconic image ever made of the Virgin Mary holding her crucified son. It may very well be the most famous sculpture ever. And yet, from the moment it was unveiled, it has held an enduring mystery. Why does the mother seem younger than the son? It may seem like an unanswerable question, but a new discovery hints at a millennia old secret. A terra cotta sculpture just attributed to Michelangelo contains a secret symbol that unlocks an untold story of murder, sex and politics with Michelangelo at its center.

Available to watch online below.
Secrets of the Crucifixion
This episode tracks several interrelated stories. These include the archaeological discovery in Jerusalem of the physical remains of “Mattathiah (Matthew) son of Judah”, also known as Antigonus, the last legitimate king of Israel, and the scientific investigation of a crucified hand – an unprecedented find – unearthed in Antigonus’ tomb. Can the scientific exploration of this find teach us how Jesus was crucified?

From Michelangelo’s terra cotta model of the Pietà, to a crucified hand, to a 1,500-year-old manuscript, to the Roman-era nails found in Caiaphas’ tomb, Biblical Conspiracies is a series that will literally make headlines around the world.

Available to watch online below
Bride of God
Gathering dust in the British Library is an ancient manuscript of the early Church, written by an anonymous monk. The manuscript is at least 1,500 years old, possibly dating even further – back to the 1st century and the religious activism of Jesus of Nazareth. After millennia of rumors, this seems to be the first solid written evidence that Jesus was married to Mary Magdalene. The manuscript also recounts that the Magdalene was a gentile, that Jesus and Mary had children and that for their earliest followers they were Mr. and Mrs. Messiah.

Available to watch online below
Michelangelo’s Angels and Demons
In this documentary we will strive to uncover the relationship between Michelangelo’s art and his beliefs, in particular the influence of the “Spirituali” movement during his twilight years. Will a recently discovered painting reveal any interesting clues about Michelangelo’s secret, spiritual life? How was this painting discovered and what was the process of authentication? The science of the authentication will form the backbone of this episode. Once authenticated, it will literally help us “decode” the heretical philosophy in the work of the most famous artist who ever lived.

Available to watch online below
The James Revelation
“The James Revelation” deals with the decade old controversy surrounding the “James, son of Joseph, brother of Jesus” ossuary. When it first surfaced in the private collection of Tel Aviv based Oded Golan, it was declared the only hard archaeological evidence attesting to the existence of Jesus of Nazareth. Then its authenticity was challenged. The Israel Antiquities Authority (IAA) declared that the first part of the inscription was authentic, but the second part “brother of Jesus” was forged. Until October 2013, hundreds of experts spent thousands of hours arguing over the authenticity of the artifact. The judge ruled in favour of the defendant. Oded Golan was cleared of all charges. During the entire time, Associated Producers tracked the events, the people and the science. We are now ready to make the definitive documentary on what is arguably the most important Christian artifact ever discovered.