Set in the 1950’s, Father Charles Duddleswell is the mischievous Roman Catholic priest in the suburban London parish of St. Jude’s, Fairwater. This spirited comedy was cleverly adapted from the humorous novels of Peter De Rosa, based on his own experiences as a novice curate. Starring Arthur Lowe, Daniel Abineri and Gabrielle Day.

Newly ordained priest Neil Boyd comes to the parish of St Jude’s where Father Duddleswell, a robust and cheerful eccentric, has been the parish priest for many years. Neil hopes to be taken on as Duddleswell’s curate, but Duddleswell tells the young man that he will have to prove himself suitable first.

Neil warns Father Duddleswell that the confessionals at St Jude’s are not entirely soundproof and confessions can be heard throughout the church. Meanwhile, the loudspeaker system in the church is inadequate and a new one is purchased.

In one of the pubs in Father Duddleswell’s parish is the Doomsday Chair. It is said that whoever sits in it will die within the week, this has happened to three customers after sitting in it. Duddleswell decides that he cannot allow superstition to flourish in his parish and sits in the chair himself. 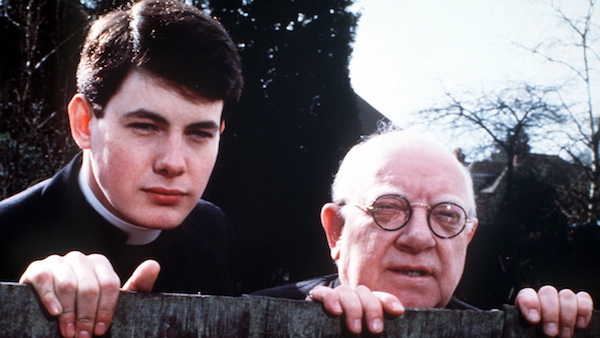 Duddleswell dislikes his neighbour Billy Buzzle’s pigeons and decides to have a bell installed in St Jude’s to dislodge them. The large bell is installed but its blessing ceremony is interrupted by the arrival of Buzzle’s dog, so Duddleswell arranges for the ringing to take place at 6 o’clock the next morning.

Father Duddleswell is putting together the plans for the annual bazaar in the Parish. Despite recommendations, Duddleswell refuses to make bad-weather plans for this annual event. Has he made a ‘grave’ error?

In a moment of inspiration Father Duddleswell decides to enter a tennis match against the Anglican clergy. Will he succeed and emerge victorious or will the result remain in the hands of the gods?

While in the attic, Duddleswell damages a portrait of the founders of the local convent. A second painting is revealed underneath and after examination is deemed a valuable painting by a French artist. A meeting is arranged between Duddleswell and the Mother Superior who implies that the portrait is treasured by the Sisters. 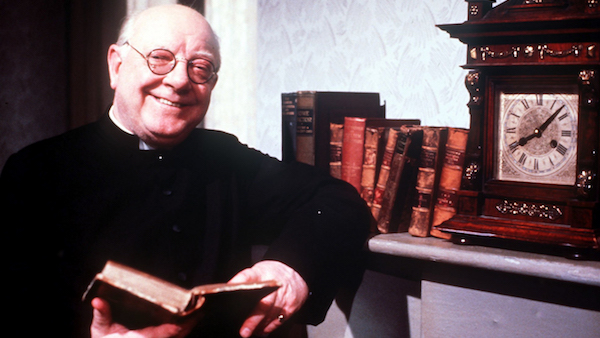 Father Duddleswell decides that Neil is ready for fresh responsibilities. He makes him official Catholic Chaplain to the local hospital. One of the patients at the hospital believes he is under a curse. Due to his belief in the curse he is not eating or sleeping which is making him ill. The doctor informs Neil the patient will only improve once he believes the curse is broken. Neil is reluctant to become involved in matters of superstition, but Duddleswell assures the young curate that he will have to resort to trickery in this case.

Father Duddleswell is delighted that the wealthy Catholic lady Miss Davenport has returned to her house in his parish after six months abroad. He and Neil can look forward to a flow of generous donations to themsleves and church funds. Neil is embarrassed by the gifts which Miss Davenport gives him, and by the attention which she lavishes on him. Is Miss Davenport becoming too attached to Neil?

Neil has to go to hospital to have his appendix removed. Father Duddleswell is perturbed to note that Neil’s nurse, Nurse Owen, is young and extremely attractive. Duddleswell pretends to Mrs Pring that he has complete faith in Neil’s commitment to celibacy, but he asks Dr Daley to talk to Neil about the perils of matrimony. Neil himself is deeply attracted to the beautiful and gentle Nurse Owen. One day as she is taking him around the hospital gardens, she tells him that she has something important and private to confess to him – she is in love. 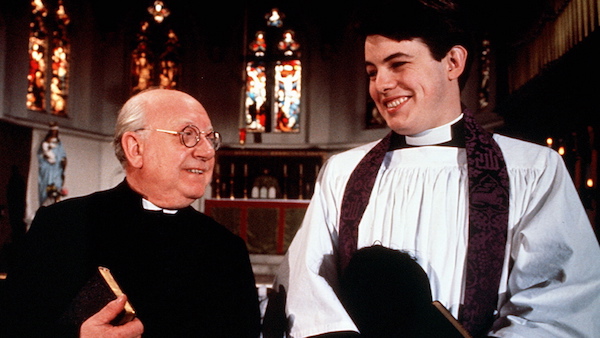 Father Duddleswell marries at least forty couples a year – but every so often he makes a mistake.

A seaman called Driscoll dies in a rest home for sailors near St Jude’s. The man who runs the home, Captain Kent, is not sure whether Driscoll was a Catholic or a Protestant. Duddleswell and the local Anglican curate argue over whether or not Driscoll should be given a Catholic or an Anglican burial. Father Duddleswell wins the contest and happily contemplates the money that will flow in to the church as a result of the funeral, but the sailor’s dying wish is to be buried at sea. Will the cost of laying the seaman to rest dampen Father Duddleswell’s enthusiasm?

Father Duddleswell is consumed with the Christmas spirit. As housekeeper Mrs Pring comments ‘When he’s bad he’s hard enough to live with, but when he’s good he’s awful’.

Father Duddleswell is convinced that his bottle of holy water has performed a miracle. Mother Stephen is certain that the prayers of the sisters at the convent are responsible. Father Duddleswell refuses to share the credit, the miracle is no good to him unless he has exclusive rights. 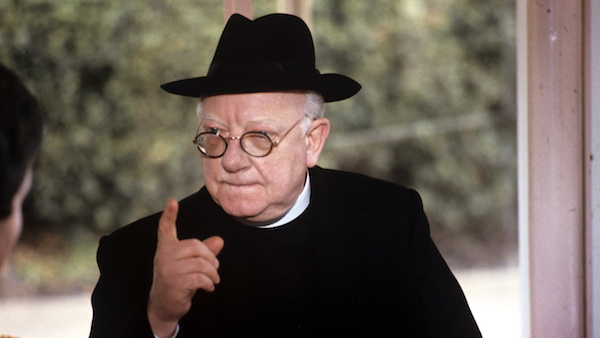 Father Duddleswell innocently offers some advice to women who are having marital problems. As a result he provides some healthy scope for gossip in the Parish. How will he get out of this one?

Father Duddleswell is being bothered by Mother Stephen who wants to put a relic of her convent’s patron saint in St Jude’s parish church. Mrs. Pring, the housekeeper, informs Father Duddleswell and Neil that she cannot work such long hours. They are forced to keep the house themselves.

Billy Buzzle sets up a pig-sty in his back yard to accommodate two pigs, Porgy and Bess. The stench is too much for Father Duddleswell who resorts to pig-napping, stealing Porgy and taking him to a nearby farm. 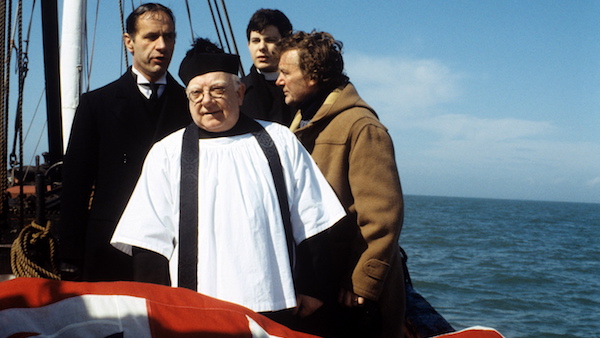 Father Duddleswell and Father Neil have to deal with the marital intentions of a young couple. Christine Hammond a war orphan raised in the convent has fallen in love with Isaac Rosen the elder son of the local Rabbi. The marriage is forbidden by some, but the two Fathers hatch a plan whereby the two lovers are married in a registry office. Will their plan succeed?

Acting against Father Duddleswell’s advice, Neil sets up a family group where married couples can meet up and discuss their marriage problems. Visits from two couples who both have problems in their relationships are planned creating trouble and controversy.

Duddleswell sends Neil to hear the catechism of the local Catholic school. The children finish by reciting the Catholic dogma that those who die in mortal sin will go to hell and burn for all eternity. Neil notices that a little boy called Jimmy Baxter is in tears at this, and the teacher explains that the boy is terrified that his old Catholic grandfather will go to hell. The grandfather, because of a series of unfortunate circumstances, nurses a bitter hatred for the Catholic Church and has become an atheist.