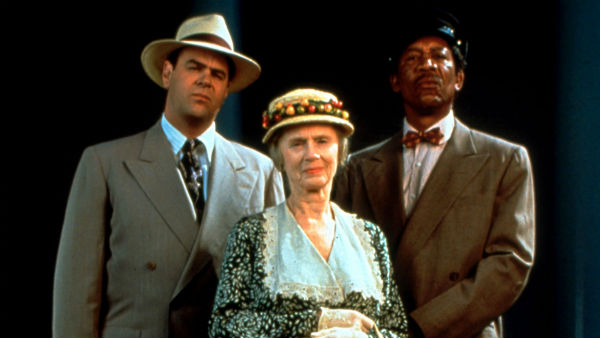 Winner of four Academy Awards, Driving Miss Daisy begins with the story of Daisy Werthan (Jessica Tandy), an elderly Jewish widow living in Atlanta, is determined to maintain her independence. However, when she crashes her car, her son, Boolie (Dan Aykroyd), arranges for her to have a chauffeur, an African-American driver named Hoke Colburn (Morgan Freeman). Daisy and Hoke‘s relationship gets off to a rocky start, but they gradually form a close friendship over the years, one that transcends racial prejudices and social conventions.

Jessica Tandy was an English-born U.S. actress, well known for her role in Broadway’s Foxfire and her Oscar-winning performance in Driving Miss Daisy(1989). Tandy was the original Blanche DuBois in A Streetcar Named Desire, for which she won a Tony Award. She was married to actor Hume Cronyn and starred opposite him in a number of films, including The Gin Game(1977) and Cocoon (1985).