I Prophesy: The Apocalypse Series 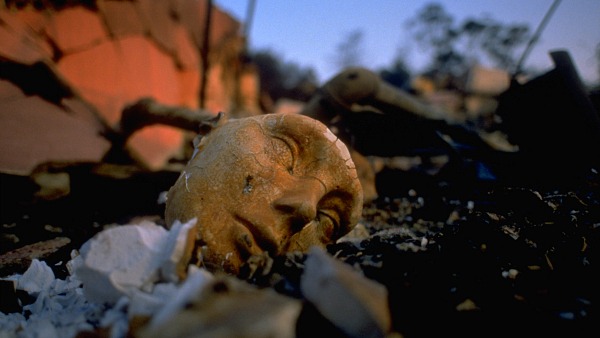 From ancient times, prophets have inspired and terrified their societies by predicting imminent and earth-shattering upheavals. And despite all our advances in science, technology and social organization, little has changed. Millions of people remain in thrall to the old and now to a new generation of prophets – oracles who foretell immense changes that threaten to transform the fundamental dynamics of our planet.

I Prophesy: The Future Revealed uses hard hitting re-enactments and CGI to immerse the viewer in the future scenarios and asks: Are we really on the edge of an abyss of change?

For behind the scenes photos, video sneak peeks and more visit our Apocalypse Countdown Feature Page.

As another End of Days date slips by without incident it’s worth stopping and working out where all these apocalyptic ideas are coming from. Why should the world ever end?

Do our apocalyptic visions indicate an end of time or a chance for a new beginning? The unlikely role a red heifer plays in the fulfillment of a biblical prophecy in Israel.

Examining whether events like the death of Henry II, the Great Fire of London, the rise of Hitler, assassination of JFK, and a catastrophic earthquake in California in 2015 have all been foretold by Nostradamus.

THE PROPHESY OF THE POPES

Pope Benedict is dead. As the bells toll, an earthquake swallows the Vatican. Days later, a super volcano erupts in North America. As an 800 year old prophecy nears its chilling climax, Judgement Day appears to be at hand.

The prophetic words of trance psychic Edgar Cayce are studied today by seekers around the world. Starting his career giving readings that helped people with their various health problems, Cayce moved on to other subjects – identifying oil reserves, predicting the stock market and solving crimes. His success and notoriety flourished in later years as he began channeling information about past lives and reincarnation – shocking subjects for a small town Sunday school teacher. Almost seventy years since his death, Cayce is best known for are predictions about the future of the earth and ultimately, the fate of the human race.

Blood Moon presents controversial theologians and renowned scientists as they decode ancient Biblical prophecies – revealing that unusual celestial events such as solar and lunar eclipses may be foreshadowing the world’s end in 2015.

Janet Ursula Southiel (Southill), more popularly known as Mother Ursula Shipton, lived in Yorkshire England from 1488-1561. She became quite well known the accuracy of her visions with some pertaining to modern times including descriptions of the radio, television, airplanes, and World Wars, and even possibly World War III.

Nikola Tesla, the famous scientist and engineer, is best known for his many revolutionary developments in the field of electromagnetism in the late 19th and early 20th centuries. Tesla is also known for a wide array of prophetic predictions, some of which eventually became modern scientific inventions, while others, such as wireless power, ion engine, null-gravity fields, and even a teleforce or “death ray” weapon are only now crossing over from the wilderness of fringe theory, and edging closer to reality.

HILDEGARD: MYSTIC OF THE RHINE

A selection of prophecies and visions from Germanic monks and nuns, dating back nine centuries to Abbess Hildegard, who predicted such events as the coming of Protestantism, the fall of the Holy Roman Empire, the decline of the Church and the rise of Antichrist and to Anna Katherine Emmerich, who in 1820 predicted WWII in Europe, as well as dire revelations regarding the 21st century.