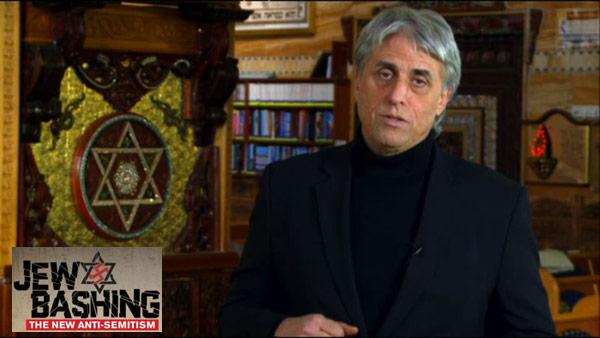 Other filmmakers have documented the growing fear among Jewish communities worldwide as a new wave of Anti-Semitic hatred seems to be gathering pace. Jew Bashing is different. Using investigative journalism and hidden cameras, we reveal Anti-Semitism as it’s never been done before. We see Anti-semitism on camera . Our goal is to experience this hatred, to understand its toxicity, instilling motivation to limit the scope of Anti-Semitism.

Jews are Nazis. They even plotted the holocaust and 9-11. They control the Economy, the Government, the Media. Jews are an evil satanic cult hell-bent on destroying civilization. Oppose them at your peril.

Beliefs like these are not the deranged ranting of isolated conspiracy nuts. They are to be found in the respectable mainstream, from British politicians and key members of the Christian and Islamic clergy. Websites that encourage Jew hatred rank in the top 1% of most popular websites worldwide.

Jew Bashing will change the way you think.

For more on Jew Bashing: The New Anti-Semitism including pictures and preview clips, visit our Human Rights Series microsite.

EPISODE 1: PAKISTAN AND THE MIDDLE EAST
Watch online below.

Our investigative team exposes rabid Jew hatred on camera among the politicians ,clerics, columnists, and academics in Pakistan, the New Democratic Egypt , and among the Hamas dominated Gaza Strip.

In Europe we go undercover among Anti Zionist groups and show how Jews have been branded the New Nazis and how Anti Semitic bigotry is once again warning of mythical Jewish lobbies dominating and controlling Europe.

In the land of free speech Anti Semites call for Jewish extinction, so called Anti Zionists claim Jews dominate American politics, we go undercover into these groups and expose on camera virulent Anti-semitism.

Canada fights Anti-semitism with much tougher laws than America yet we show how militant Islamic groups, Anti-Hassidic activists, and Anti-Jewish web bloggers still pread Anti-semitism throughout the country and the world.