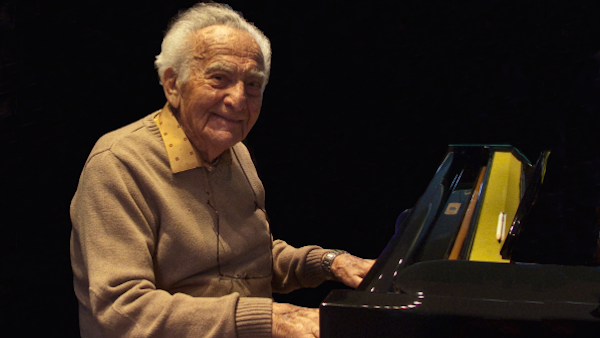 VisionTV is pleased to present Leo Spellman’s Rhapsody: In Concert, a film featuring the first Canadian performance of the composer’s Rhapsody 1939-1945.

Rhapsody 1939-1945 is a concert that took place on September 3, 2012, in front of a sold–out audience at Toronto’s Harbourfront Centre as part of the Ashkenaz Festival. At the time, Leo was seven months shy of his 100th birthday and surrounded by his children, grandchildren, and 105-year–old sister Chana. The violin soloist is renowned virtuoso Moshe Hammer and the conductor is Paul Hoffert, the award-winning Canadian musician and composer and founder of the band Lighthouse.
Leo was born on April 18, 1913 in Poland into a family of revered musicians. By the time he was four, Leo was playing proficiently on the piano and by age nine, he was playing in a silent-picture house after school. When the talkies arrived, Leo transferred his talents to a travelling band. Music and family always remained the constants in Leo’s life until his passing on November 24, 2012.

The concert, which was executive produced by ZoomerMedia’s Moses Znaimer, was the culmination of Leo’s incredible journey that began in Furstenfeldbruck, a German DP camp where he started composing Rhapsody in 1947. Leo and his wife had miraculously survived the Holocaust, hiding in the forests of Poland and then thanks to the unlikely offer of shelter from a 21-year old Polish student, Henryk Wronski, who hid the couple for 18 torturous months.

Leo had been waiting for this moment for 60 years. Until the late 1990s, the score for Rhapsody 1939-1945 lay hidden in a suitcase in his Toronto garage, too painful for Leo to play. Brett Werb, a musicologist at the Washington Holocaust Museum discovered Leo’s story, came to Toronto and helped unearth Leo’s scores.

Rhapsody 1939-1945 subsequently received its North American premiere at the conference in January 2000. Until the Ashkenaz Festival, the work had never been performed or recorded in Canada. Leo reached out to Paul Hoffert to assist. The piece depicts three themes: the horror of war; the sadness of loss; and with joyful klezmer music, the resilience of the human sprit and hope for a better tomorrow hence the timely New Year’s Day broadcast. The Rhapsody builds to a finale, referencing “Hatikvah” and the hope of the establishment of Israel.

Along with the recording, Paul, his wife Brenda Hoffert, son David Hoffert and Jeff Preyra have been producing a 90-minute feature documentary about Spellman’s life, courage, and music.