Mary Berry shares her favourite Easter recipes and takes a look at how Christian communities all over the world celebrate Easter with special food.

Mary shares her favourite Easter recipes, such as hot cross buns, simnel cake and roast lamb, and takes a look at how Christian communities all over the world celebrate Easter with special food. Also, Mary discovers the diverse traditions followed by British families and communities during Lent and Good Friday.

Mary shares her favourite Easter recipes. She discovers how the Greek Orthodox community break the Lenten fast with tsoureki bread and takes a look at Filipino and Italian Easter specialities. Mary also spends a day with the Archbishop of York, cooking up a storm in his kitchen. 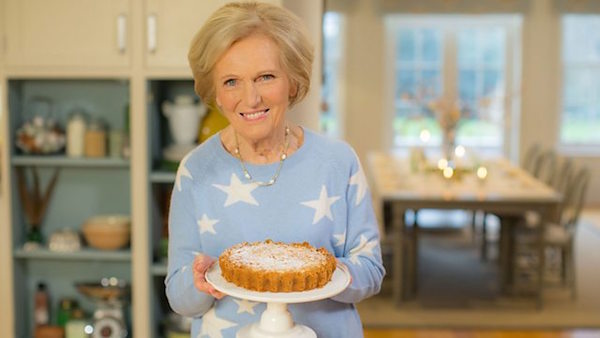 Mary Berry trained at The Cordon Bleu in Paris and Bath School of Home Economics. In the swinging ’60s she became the cookery editor of Housewife magazine, followed by Ideal Home magazine.

Her first television series “Afternoon Plus” with Judith Chalmers came out in the early ’70s and was a big hit with a lot of British mothers. Three children later she continued through the ’80s writing books and filming television series for BBC from her home in Buckinghamshire.

She started the ’90s by launching her Aga Workshops, a cookery school at home, with over twelve thousand visitors over sixteen years.

Berry has remained busy in the 2000s, all the while receiving various accolades. In 2012, she received the Commander of the Most Excellent Order of the British Empire designation.