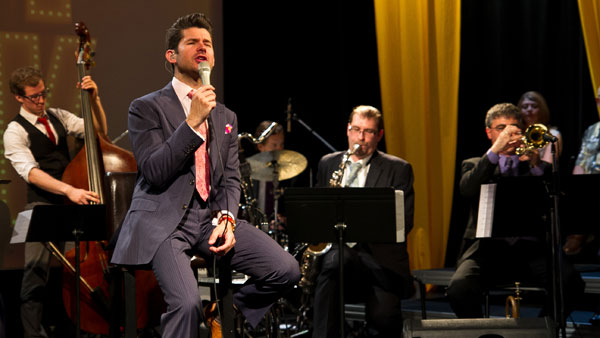 An exclusive AM740 broadcast from the ZoomerPlex in Toronto. Canadian Jazz Crooner Matt Dusk returns to his jazz roots to release his fifth full length studio album entitled My Funny Valentine: The Chet Baker Songbook.

AM740 Host Norm Edwards chats with Matt about the music and his change in style from the large and grandiose sounds of Bobby Darrin, Nat King Cole and Frank Sinatra to the understated melodies of Chet Baker. With My Funny Valentine, the JUNO-nominated performer reintroduces and reinterprets Baker’s repertoire for a new generation in front of a live audience.

This former choir boy said that he would allow himself a glass of scotch late at night in his studio to get relaxed and into the mood before recording the famous Chet Baker songs. He made this album “to be listened to at night in the company of someone’s arms. Music is the atmosphere to be romantic”, and that this album is the perfect soundtrack for an intimate evening. Jazz music has enamoured this crooner since his teenage years, and this type of music allowed him to meet the ladies while crooning at karaoke.

Fall in love with Matt Dusk with My Funny Valentine: The Chet Baker Songbook Special.