Get captivated by the powerful, romantic saga of the Poldark family! Enjoy our encore presentation of Poldark Seasons 4 & 5 Thursdays at 10pm ET from Nov. 5, 2020 through Feb. 18, 2021

In Season 5, a new century brings the promise of a hopeful future, but the past continues to cast a long shadow over Cornwall. Ross’s (Aidan Turner) resolve to spend more time with those he loves is tested by a plea from an old friend, while Demelza (Eleanor Tomlinson) contends with dangers close to home and George (Jack Farthing) courts corrupt powers.

Unlike previously, this final season of Poldark has broken new ground by taking place during the 11 years between Winston Graham’s seventh and eighth books in the Poldark series, The Angry Tide and The Stranger from the Sea. 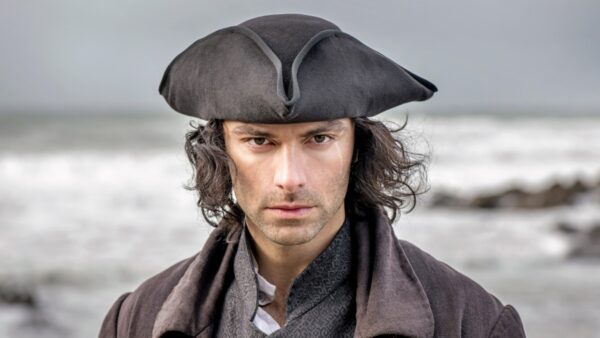 The story began in 1783. Ross Poldark (Aidan Turner) returns to Cornwall from the American War of Independence to find his father dead, his estate in ruins and his sweetheart, Elizabeth (Heida Reed), engaged to marry his cousin Francis (Kyle Soller). On an impulse, Ross saves street urchin Demelza, (Eleanor Tomlinson), and with her help and a steely resolve, Ross turns around his fortunes despite George Warleggan’s (Jack Farthing) best efforts.

Filled with the breathtaking scenery and majestic seascapes of ancient, rugged Cornwall in southwestern England, this sweeping, 8-part saga is based on the Poldark series of 12 novels by Winston Graham. It’s a cinematically-inspired update of the original Poldark series first broadcast on the BBC in 1975. The 2015 version of Poldark premiered Feb. – April 2015 in the UK, becoming an instant must-see hit with an average of almost 8 million viewers per week, catapulting the brooding, darkly handsome Aidan Turner to matinée idol status.