Quartet Plus Four at Christmas 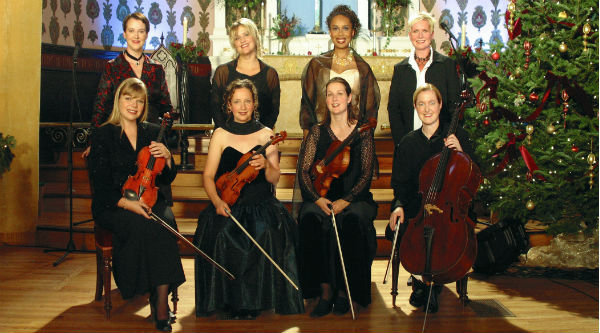 The Blue Engine String Quartet was formed in 1997 as the core ensemble of the Nova Scotia chamber music series, Blue Engine Music. The Quartet are all members of Symphony Nova Scotia.

Blue Engine holds true to classical roots performing many of the masterworks of the string quartet repertoire, including twentieth century landmarks by Ravel, Shostakovich, and Arvo Pärt. The Quartet has worked closely with important Canadian composers Christos Hatzis, Peter Togni, Tony Genge and Brian Current. In September 2006, the Quartet premiered Brian Current’s “Faster Still” with Duo Concertante in St. John’s, Newfoundland. This work was commissioned by the CBC especially for this collaboration and the concert was broadcast nationally on CBC Radio’s “Two New Hours” and “In Performance”. The members of the BESQ are proud to champion works by women composers: Amy Beach, Fanny Mendelssohn, Rebecca Clarke and Germaine Tailleferre among them. An important part of Blue Engine’s mandate is to provide audiences with innovative concert experiences. The 2003 “Lost Composers” concert received national attention: it was an emotionally charged evening- an overflow Pier 21 audience heard premieres of works that were repressed or hidden away during the Holocaust.

The Blue Engine String Quartet is frequently broadcast on CBC Radio, appears on CBC Television, and was featured, along with four distinguished guest singers in “Quartet Plus Four at Christmas”, a New Scotland Productions Christmas Special for Vision TV and CBC. They were also featured in a BBC documentary film on the life of the late Dudley Moore, in which they perform Moore’s one and only string quartet written during his Oxford years.

Halifax has one of this country’s most vibrant popular music scenes, and the Quartet are frequently featured as guest artists on recordings by the likes of Jill Barber, Meaghan Smith, Mary Jane Lamond, Heavy Blinkers, Chucky Danger and Jenn Grant.