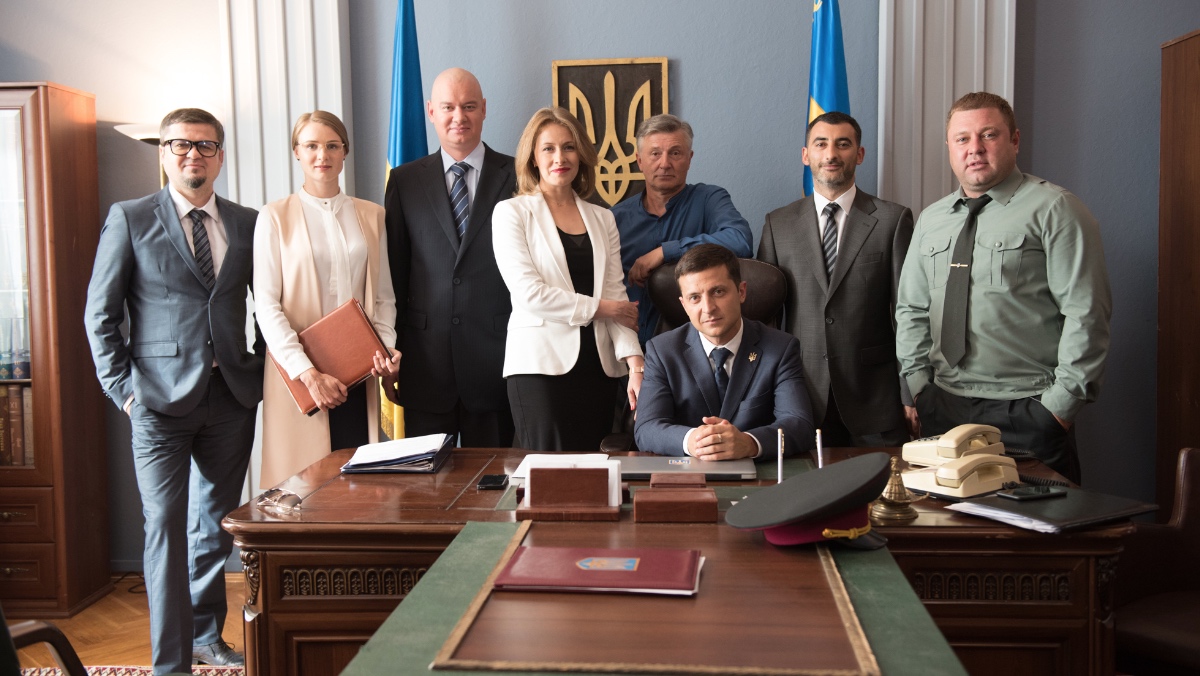 VisionTV will encore Servant of the People on Tues., Wed. & Thurs. at 10pm ET / 7pm PT through Thursday, Aug. 4, 2022 with English subtitles. Each week’s episodes will be encored Friday and the following Monday at Midnight ET / 9pm PT.

Please help us help the millions of Ukrainian people displaced by Putin’s war by donating to the Canadian Ukraine Foundation. Visit cufoundation.ca.

What happens when an ordinary, honest man accidentally gets elected president of Ukraine? Will he turn the world upside down?

In the comedy series Servant of the People, modest and humble high school history teacher Vasiliy Holoborodko, played by series creator, producer and star Volodymyr Zelenskyy, is caught on camera raging over the miserable situation in his country. When one of his students posts the video on YouTube it becomes a viral sensation. Everybody loves Vasiliy’s outrage.

The series became a huge hit and catapulted Zelenskyy into the real-life public eye and voted him into office as an unlikely but charismatic, inspirational and heroic leader who is the current President of Ukraine.

Servant of the People began in 2015 and ran for three seasons, ending when Zelenskyy launched his run for Presidency in 2019.

Servant of the People follows Vasily’s new life as president, how he copes with overwhelming expectations, not only from the nation, but also from his family and friends. Vasiliy has no interest in changing his life. He wants to stay the same man he’s always been. He wants to live in his apartment with his parents, to borrow money from his friends, and to take his bike to work; except he is no longer a high school history teacher, he is now the most powerful man in the country. Will the dark forces of the establishment grind this modest, honest man down? Or will Vasiliy survive his fight against institutionalized corruption?

This is a classic David & Goliath story. But who will win? The giant or the man?

Further to our premiere broadcast of Servant of the People

VisionTV is proud to present this tribute to Zelenskyy’s extraordinary talents, and introduction into the heart and humour of a President who now risks his life to stand up to corruption and tyranny and fight for the Ukrainian people.

Volodymyr Zelenskyy himself created, produced, and wrote the prescient series which is airing with his knowledge and approval via his representatives. The series is in huge demand worldwide, currently airing in the United States (in English and Spanish), England, Italy, Hungary, Slovakia, Latvia, Lithuania, Estonia, Albania, and Greece.

For those who have only seen images of Zelenskyy passionately marshalling aid for his besieged country, Servant of the People is an opportunity to watch him in a surprisingly parallel context which articulates the principles of leadership and sacrifice the Ukrainian president now displays on the world stage. As Zelenskyy continues fighting to save his country, the character he played in Servant of the People offers a look at where those values originated.

“I do know one thing: One should act in a way that doesn’t evoke shame when looking into children’s eyes … This is what I promise you, the people of Ukraine,” says Zelenskyy’s fictional character.

The series is also an opportunity for millions of Canadians to see many of Ukraine’s beautiful cities and landmarks before the destruction and devastation caused by Putin’s war, and an opportunity to learn about the vibrancy of Ukrainian culture.

Our hearts go out to Ukraine and the fighting spirit of their proud people. During the broadcast, VisionTV will be airing PSAs to promote donations to the Canada Ukraine Foundation and prominent Canadians will be participating in spots to express their #StandWIthUkraine message.