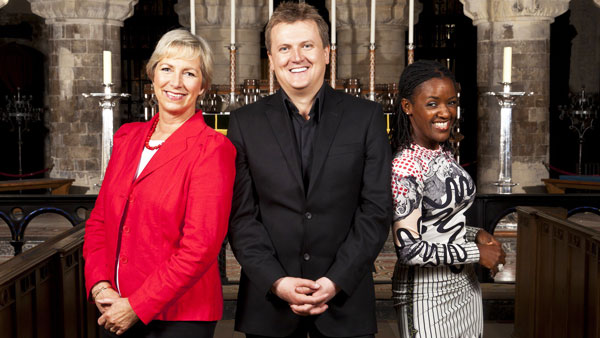 Airing since 1961, “Songs of Praise” is a glorious mix of Christian music performance and profiles of regions, people and causes that hold the Lord in high esteem.

“Wigan”
Sally Magnusson is in conversation with the appointed head of the Catholic Church in England and Wales, Cardinal Vincent Nichols, as he shares his memories of being a young priest in Wigan and talks about his hopes for the future. With music from the St. Oswald and St. Edmund Arrowsmith RC Church in Ashton-in-Makerfield.

“Gosforth”
Pam Rhodes visits Newcastle upon Tyne to explore the continuing significance of St. Bede, the Geordie accent and the river itself; and she introduces traditional and modern hymns from Trinity Church, Gosforth, and performances by the High Kings.

“Gospel Choir of the Year – Part 1.”
Get ready for the glorious sound of gospel from the Hackney Empire in London as David Grant introduces six of the best amateur choirs in the country, who sing with all their heart and soul in the first of two programmes to see which choir will become the Gospel Choir of the Year. Part 1 of 2.

“Gospel Choir of the Year – Part 2.”
It’s decision time for celebrity judges Carrie Grant, Mica Paris and Muyiwa Olarewaju. From London’s Hackney Empire, David Grant hosts the inspirational and exciting final of the competition as six amateur choirs take to the stage hoping to become the Songs of Praise Gospel Choir of the Year. Part 2 of 2.

“Junior School Choir of the Year – Part 1”
The top junior school choirs from around the UK compete for the 2014 title.

“Junior School Choir of the Year – Part 2”
The top junior school choirs from around the UK compete for the 2014 title.

“Private Chapels”
Bill Turnbull goes behind the scenes of some of Britain’s most fascinating private chapels. He discovers the ornate splendour of Europe’s largest and one man’s incredible mission to create possibly the smallest. Plus, music from the choirs of private chapels in some of the country’s most stunning locations.

“School Choir of the Year”
The top junior and senior school choirs from around the U.K. compete for the 2014 title.