Sixteen-year-old Rock Burdock does not see eye to eye with his father. But when his tree, a beautiful Sitka Spruce wins a contest to be the next Washington National Tree*, Rock is forced to take a six day road trip with his dad, Corey Burdock (Andrew McCarthy) who reluctantly agrees to transport the massive spruce on a flatbed trailer with Rock as his traveling companion. Now the race is on to get this tree across the nation fast enough for it to survive being uprooted and transplanted. The first of many obstacles they face is a raging forest fire that threatens to destroy the tree, but they manage to plow on through it, singed and terrified but for the most part, unscathed.

The trip across America is filled with confrontations between father and son, and a new, if not somewhat hot romance between Rock and an attractive online friend he finally meets in person that could promise love in his future. At a stop in the Midwest, Rock reconnects with his grandmother and also finds he’s becoming a media celebrity. Additionally, when the sponsor of the contest decides to chainsaw off the roots of the tree, killing it, a real media circus ensues as Rock and Corey fight to save the tree and while doing so they also save their relationship.

*Since 1923, the United States has held a tradition of lighting a National Christmas Tree in Washington, DC. In 1978, a live 40-foot Colorado blue spruce was transplanted from York, Pennsylvania to its present site on the Ellipse, the grassy area south of the White House. 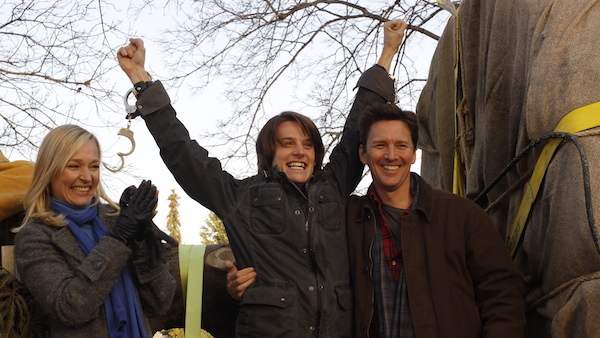