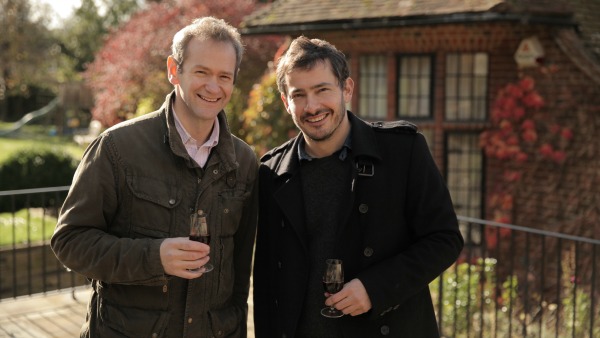 For Alexander Armstrong and Giles Coren Christmas is about enjoying time with their families. In their case that means each other since they’re brothers-in-law. Just like the rest of us, they spend much of the festive season indoors eating and drinking. As Giles has it, Jesus’s first miracle was turning water into wine so surely he’d want us to get pissed on his birthday.

Every year Britons spend over £10 billion on alcohol at Christmas. And every year exactly what’s drunk in the Armstrong-Coren family is the subject of some debate. Alexander is usually hosting and he likes to push the boat out, spoiling his friends and family with the finest booze he can get his hands on. Giles doesn’t really see the point of splashing out on wine since everyone’s already a bit squiffy by the time they sit down for lunch. As far as he’s concerned a bottle or four of something cheaper would do just as well.

This year Giles and Alexander intend to settle this controversy once and for all. They’re going to put together their definitive Christmas selection pack. But theirs won’t come in a net stocking with a cardboard Santa at the top. It’ll come in bottles. However, just like the traditional selection pack, over-enthusiastic consumption may cause nausea.

They’ll be looking for twelve different festive drinks they can agree on. Sometimes they’ll find the winner in a category together, other times they’ll be championing different things. In some categories they’ll be sourcing their contenders, in others they’ll be making their own creations from scratch. Together their festive dozen will represent everything they need to ensure they’re brimming over with the spirit of Christmas.