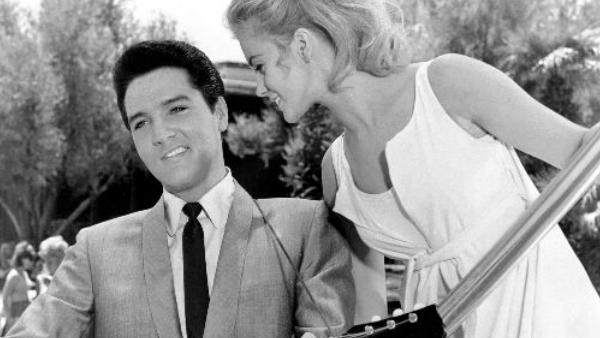 While working as a waiter in Las Vegas in order to earn money to pay for his new motor car, Lucky swims in a sea of all the wrong girls, until he finally stumbles upon the right one, the woman he loves, Rusty Martin. In this playful battle of the sexes, Lucky and Rusty engage in screwball situations true to romantic comedy fashion, until Lucky ends up losing Rusty and must search the glittering desert mecca in order to win her back.

In 1955, Presley began to develop a following with fans being drawn to his unusual musical style, provocative gyrating hips and good looks. That same year, he signed with RCA Records, a deal worked out by his manager, Colonel Tom Parker. Presley was on a roll, scoring his first No. 1 single with “Heartbreak Hotel,” as well as his first No. 1 album, “Elvis Presley,” and signing a movie contract with Paramount Pictures—all in 1956. Despite the uproar that his sexy dance moves caused, he also became a popular guest on a number of television variety shows.

Soon, Presley was everywhere—on the radio, television and the silver screen—working as a musician and actor. His first film, “Love Me Tender” (1956), was a box office hit. Even a stint in the U.S. military couldn’t put a damper on Presley’s thriving career. He received his draft notice in 1957, and was inducted into the Army the following March. He eventually served in Germany for about a year and a half. Shortly before Presley left for Europe, his beloved mother, Gladys, died. He was granted a leave and returned to Memphis for the funeral. Deeply saddened by her death, Presley returned to duty. While in Germany, his spirits were lifted slightly when he met a young teenager named Priscilla Beaulieu.

After leaving the Army in 1960, Presley resumed his career and was soon back at the top of the charts with the soundtrack for his film GI Blues. He continued recording music and acting in such films as “Blue Hawaii” (1961), “Girls! Girls! Girls!” (1962) and “Viva Las Vegas” (1964). Though his films were often hit or miss with both critics and audiences, they brought in a profit and the soundtracks usually sold well. By the late 1960s, however, the enigmatic performer appeared to be losing his box office appeal. Proving he was still the “King of Rock ‘n’ Roll,” he recorded his first TV special in 1968, often referred to as the “’68 Comeback.” He wowed audiences with his performance, which showcased his talents as a singer and a guitarist.